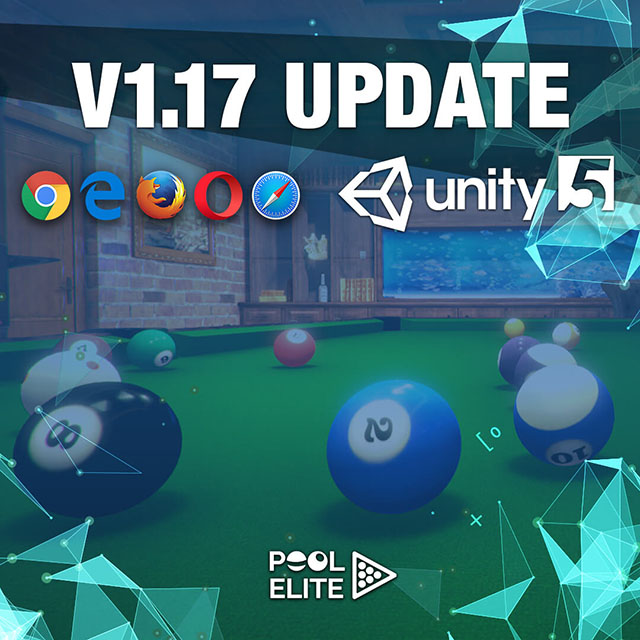 Pool Elite V1.17 Update is Live!
Hi everyone, Pool Elite is live with V1.17 Unity 5 Update. We have been hard working on this major change to provide you a better game experience.

Let’s have a look at v1.17 Unity 5 Update with questions and answers:

➤ What is Unity?
Unity is a cross-platform game engine developed which is primarily used for developing video games and simulations for computers , consoles and mobile devices.

➤ Why upgrading to Unity 5 and WebGL?
Our game was developed with Unity 4 and it’s an old technology now which leads many bugs. Also many browsers stopped supporting Unity Web Player as you all already know.
Lots of Unity’s features and systems have been upgraded in Unity 5, including Physics, Audio, Animation, Shaders and more. Therefore Unity 5 allows us to improve our game easier than before.

➤ What will change on player side?
Because the game is redeveloped with Unity 5, the physics will be different than before. We worked hard to reach realistic physics as much as possible and will continue to improve physics with each update. Promise!
Also there will be less bugs when the beta is over.

As we released this Unity 5 update as beta, we expect some bugs. We will be waiting for your support to catch these bugs and fix them with the next updates.